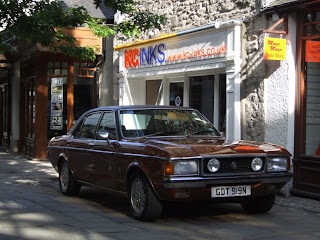 The ginger car has come to work! We are all packed and ready and have come to work until lunch time, then setting off to Lancaster to be interviewed on the local radio station The Bay! The car has been having lots of admiring looks from the general public! I have just finished doing a few last minute jobs like having a spare set of keys cut - we only had one set and have spent the last year worrying about shutting them in the boot by mistake! John and I are a mixture of excitement and fear at the moment, the car is running beautifully apart from one small problem - starting! The automatic choke is not working as it should (even though it has been to the garage a LOT in the last few months) once you are going it is fine, it just takes a few minutes to think about it! Hopefully she will behave herself on holiday! Well all that remains is to wish us luck and keep your fingers firmly crossed for us! I will be putting up lots of pictures and videos over the coming weeks so look out for us!
Posted by KC Inks at 02:30